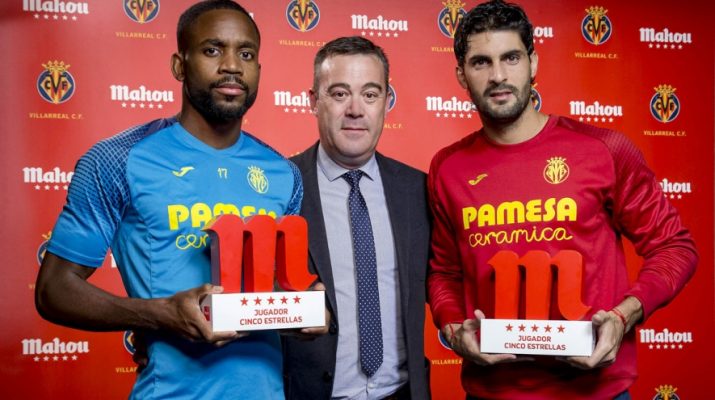 A double winner for October! Mariano Barbosa and Cédric Bakambu got the same number of votes from fans for October’s best player. This is the first time that the Villarreal CF fans’ votes have finished in a draw for the Mahou Five Star Player award.

Villarreal CF’s Argentinean goalkeeper and the French-Congolese forward were both chosen as the best players for October after their great run of form at the rear and the helm of the Yellow Submarine. The Villarreal goalkeeper has let in less than a goal a game in the 14 matches that he has played so far this season and has kept a clean sheet in 8 of those fixtures. For his part, Villarreal’s DR Congo striker is the Yellows’ top goal scorer with a total of 9 goals so far this season, 8 in the LaLiga Santander and 1 in the UEFA Europa League.

Both players were very grateful to receive this award. Barbosa said: “It’s always great when the fans are satisfied with your performance. I give my all everyday to be able to perform at a high level in every match. We hope to keep this good form going”.

Cédric Bakambu also wanted to thank the Yellows fans: “I can only say thank you to the fans because since I arrived at this club they’ve continually supported me. I hope to score many more goals this season to make them all very happy and so we as a team can achieve our objectives”.

The way to choose the Five Star Player is simple. Every month, fans vote via Twitter for who they think has been the team’s best player. To do it correctly, users have to tweet the name of their chosen player with the hashtag: ‘#Jugador5EstrellasCVF’ during the set time period time. Once this time limit is up, votes are counted to determine the winner.

Through this initiative, Mahou Five Stars (Mahou Cinco Estrellas) announces the stand out player for each month. The prize is awarded by the fans, who cast their votes on Twitter; specifically on the ‘@futbolmahou’ profile, with the collaboration of the Villarreal CF official Twitter account (@villarrealcf).

The Five Star player award is given out every month during the season. Don’t forget to vote for your favourite player for November. Make sure you keep an eye on the ‘@futbolmahou’ and ‘@villarrealcf’ profiles, where the time period for voting and eventual winners will both be announced.

Mahou Cinco Estrellas continues to support Villarreal CF for another season. Through this initiative, every month, the best players of the team from the Castellón province are recognized, with the fans being those responsible for choosing them.